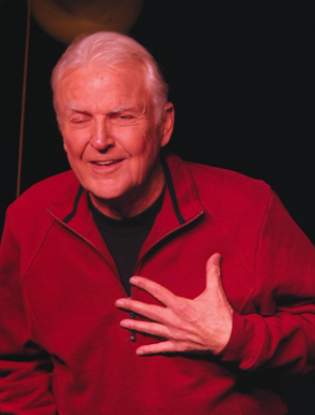 THE AUDACIOUS SELF
is a tutorial developed by Mr. Zerbe in which he works one-on-one for one hour, twice a week,
for seven weeks.

THE AUDACIOUS SELF
is an attempt to reconcile for the actor the growing notion of niche acting (associated with film
persona) with the development of character. A series of rigorous exercises that allow the actor
to first experience a sense of self and then, paradoxically, move that experience, centered by
it, slowly and carefully from the self. The concentric widening of that self into character…

A FACET OF SELF THAT IS SOMEBODY ELSE
"You will be drawn to these characters and begin to see them in yourself
and yourself in them. Perhaps more than anything else, it is this delicate private engagement that I
wish for you... the suspension of whatever reality you anchor on... the furtive
displacement of your own self to allow a larger audacious self"

Please email with the following information: